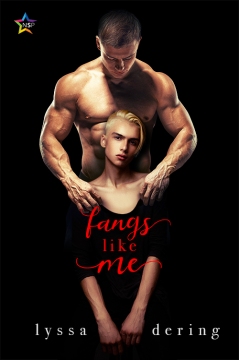 Lane, a newborn vampire, still feels the pain of betrayal. Two years ago, a faithless boyfriend took his life, and now, Lane’s Maker has also left him behind. The pain of separation burns strong when all Lane wants are arms to hold him and enough warm blood to satisfy his voracious appetite. At a shifter party, Lane is drawn to a hunky Alpha werewolf who tries to console him.

Parker is more than a thoughtless hookup. Since his family disowned him for finding boys just as hot as girls, all he wants is someone to love and look after. The sweet little vamp calls to his protective instincts, but he sure is jumpy. Cuddling with boys is new and delicious, but when this boy also wants him as a food source, things get complicated.

Vampires and shifters aren’t supposed to get along, and Parker’s rough dominance triggers bad memories for Lane. But Parker’s wolf wants Lane, and he knows he can give Lane what he needs. Can Lane learn to navigate his past and give the thing growing between them a chance? Or will the very real possibilities of heartache, abandonment, and even death, keep them apart?

An ARC of this was provided by NineStar Press

I loved the premise of the book – a vampire and a shifter together. It sounded interesting and fascinating. But – it pains me to say this, because I really wanted to like it – but it didn’t live up to my expectations.

One issue I personally had was, that there was too much sex in this story and not enough story development.
After I finished Fangs Like Me I felt like I didn’t really know either of the characters. Overall the story was quite short, so that might be why the character development wasn’t as prominent as I would have liked.

The relationship between Lane and Parker felt off and just rubbed me the wrong way. Parker with his alpha machoism and Lane with his want of being treated like an adult, but ultimately behaving completely immature and hurried, was really annoying after a while. I didn’t understand the attraction between both of them because all the pretty much do is fuck.

What I did like was Dering’s take on vampires and how their bodies “function”. Don’t want to spoil this too much but I defintely enjoyed this more than sparkly vampires. Her take on vampires is quite interesting and new (to me at least. I haven’t read a lot of vamp books though).  It’s a bit different and definitely more bloody. 😉

Altogether though this was only an okay read.