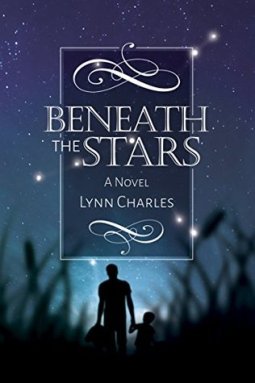 At a turning point for his growing fashion line for transmen and butch women, Sid Marneaux receives a life-altering phone call. His father, who raised his family alone after his wife passed, is in failing health. When he goes home, he fears he could lose the business he has spent most of his adult life building.

What he could not have anticipated was meeting Eddie Garner, the city’s new fire chief. After a heroic rescue, their romance sparks hot, launching into a swift affair. But Eddie is harboring his own burdens: the painful death of his best friend and the responsibility of raising her young son—their son—Adrian.

Through the wisdom of a child and the connection of mothers-now-gone, Sid, Eddie, and Adrian venture and fumble to define family, career, and, most importantly, love.

*I received an ARC of this from Interlude Press

Beneath the Stars is a beautiful story about finding home, finding a family and building a life together. About growing and taking chances and following your heart. This one really left an impression on me.

What I loved most was the portrayal of the different relationships both within the characters’ families and outside of them. I think Lynn Charles did an amazing job showing the complexity of caring for a family member that has Alzheimers; how stressful it can be – I don’t have any personal experience with Alzheimer though – and that it’s a 24/7 task. She really showed what strain it puts on someone when they are the sole-caretaker for someone.

Right from the beginning Sid and Eddie have a connection. They start things off not thinking that it will really be something serious or permanent. Slowly though, without them really noticing, they fall in love. It’s truly gorgeous how they get to know each other One of my favorite scenes is when they lay down together to watch the stars. Those intimate moments – not even the sex-scenes, though they were wonderful too – but Sid and Eddie just lying down to watch the stars, were perfect for conveying the strengthening bond.

“I know I’m repeating myself, but-” Eddie brushed his knuckles over the curve of Sid’s jaw, and a day’s stubble scratched under his fingers. “This is where I want to kiss you.”
Sid’s eyes closed at Eddie’s touch; a smile curled his lips and creased the corners of his eyes. “This is where I say yes.”

Something Eddie doesn’t tell Sid at first – because he never anticipated falling in love with Sid – is that he has a son. This eventually blows up in his face. Understandably so. As a reader, looking from the outside I understand why he didn’t tell Sid at first. It’s not something a random hook-up needs to know. And later on there never was a moment to tell him. So I understand why Eddie keeps it a secret, but at the same time I can absolutely relate to Sid’s reaction.
I really liked how Sid took a step back before adopting Adrian and Eddie as his family.

And Adrian! ❤ Sweet and precious Adrian. I absolutely adored that little bundle of energy. He’s such a typical five-year old. So clever and sharp. He said a couple of things that made me laugh out loud.

Home couldn’t be found on a map; home lived and breathed in this man.

Beneath the Stars is such a beautiful story, heartfelt and.. wow. (I wish this wow would actually convey everything I want it to say.) Beneath the Stars really hit me – in a good way – but wow. Naturally (the topic of) losing a family member isn’t easy to handle but the author did this wonderfully. She did a great job of balancing the sad moments and the happy moments. And I particularly liked how Eddie and Sid deal with Adrian’s grief.

Just like in Black Dust, her previous novel, Charles effortlessly created characters that are so human and so real you want to go and meet them. Get to know them, spent time with them, comfort them when they need it or just watch the stars together. (Though I don’t have the slightest clue about star formations but I guess Sid could teach me a thing or two.)

Lynn Charles’ love of writing dates to her childhood where thoughts, dreams, frustrations, and joys poured onto the pages of journals and diaries.

She lives in Central Ohio with her husband and adult children where a blind dog and his guardian cat rule the roost. When she’s not writing, Lynn can be found planning a trip to New York or strolling its streets daydreaming about retirement. Her previous novels include Chef’s Table (2014) and Black Dust (2016).