Asher Schenck and his husband John opened their downtown gastro pub in the midst of Detroit’s revival. Now, five years after John’s sudden death, Asher is determined to pull off a revival of his own. In a last ditch attempt to bring Idlewild back to life, he fires everyone and hires a new staff. Among them is Tyler Heyward, a recent college graduate in need of funds to pay for med school. Tyler is a cheery balm on Asher’s soul, and their relationship quickly shifts from business to friendship. When they fall for each other, it is not the differences of race or class that challenge their love, but the ghosts and expectations of their respective pasts. Will they remain stuck, or move toward a life neither of them has allowed himself to dream about?

Today I’m very lucky to be interviewing Jude Sierra, author of Idlewild. Hi Jude, thank you for agreeing to this interview. I hope you’re ready to tell us a little about yourself, your background, and about your latest book.

Thank you for having me!

Do you pay attention to literary criticism? If so, how do you handle it?

I do. Often people tell you not to look at bad reviews – which if you have about 700 reviews, maybe the impulse is easier to resist? J But I will admit, I read all of my reviews. Sometimes you see things that hurt a little; and I’ve had misunderstood characters. But it happens. However, if you see a consistent criticism from different readers and reviewers, that’s a point to stop and say, hey, what’s this about? Is it a style thing? If so, how can I make this work, what can I learn? Don’t get me wrong, I know myself as a writer, and there are things I wouldn’t ever stop doing altogether. Sometimes, your style and a readers preferences don’t match up. That’s okay. I don’t think I would ever subject myself to bad reviews if I wasn’t willing to be open minded and learn from them, you know?

How do you come up with your titles?

I’m pretty bad at titles, to be honest. I think What it Takes – my second book – was the easiest for me. It came from a song that really inspired the story. Idlewild is the name of the bar in the book, and my good friend Georgie gave me that name. One day we were chatting and I was asking for suggestions of bar names. She was on fire! I think she sent me about ten in a row, one after another. I saw Idlewild and it was over. It was perfect, both for the bar and for the book. Hush, my first novel, was also a collaborative effort. A really hilarious collaborative effort that involved a four-way conference call with all of the Interlude staff.

What new authors have grasped your interest?

I am really excited for E.M. Ben Shaul’s Flying Without a Net. It’s about a man named Dani, who is a secular Israeli man and Avi Levine, who is an Orthodox Jew and who is working to reconcile his religion with his identity and desire. I love books with these kind of themes, where we’re complicating very real world problems, such as faith and desire, from authors who really get it.

What is the hardest part about writing?

Right now I’m juggling a Masters program and a commute with family life and after school activities – and a husband who works nights and often weekends – with writing and editing. It’s hard to stay motivated at times. And when there are so many stressful demands on my time and energy, it can be hard to tap into creativity. In the end phase of writing Idlewild my mother was diagnosed with cancer, and so I was trying to care for her and do all of the other things. Needless to say, it was taxing. I ended up taking a nine month break from writing once Idlewild was complete, which I think was actually very beneficial. I’m writing again now and feel really inspired and creative and motivated.

Coffee: life sustaining nectar of the gods. Tortilla chips: always there, always yummy, never let me down. Wine: do I need to elaborate? Anything involving pasta. I need gluten free pasta, but that also means lots of yummy things like pad thai…mmmm.

“Want to make the muffins to go with the cider?”

Asher props the recipe card against the container of flour he’s retrieved. “That sounds great.”

“Awesome,” Tyler says. Asher smiles, and it’s not sad this time, or hopeful or anything to make this whole exercise hard. It’s normal, it’s level. Tyler loves that smile and the natural camaraderie.

“All right, boss, tell me what needs doing.”

But for the directions Asher gives him, it’s quiet in the kitchen. Tyler washes and peels and chops the apples while Asher collects and lines up ingredients. Despite the hours he logs here, Tyler’s not very competent in the kitchen.

“You’re going to chop a finger off,” Asher says. “Here.” He takes Tyler’s hands carefully. “Curl the tips of your fingers under.” Asher’s fingers are gentle, warm and bigger than his. A tingle shivers down Tyler’s spine. His breath comes out harder than it should, giving him away. Asher pauses—it’s barely perceptible—and takes a breath of his own. But he doesn’t move away. Tyler can smell him and feel the height difference. Asher’s not overly tall, but he is bigger than Tyler. Most men are.

“How’s that?” Tyler manages. He mimics the movement Asher’s shown him, and places his fingers more carefully on the apple.

“Perfect,” Asher says, and then moves away. Tyler goes back to chopping.

Once they’re finished, Asher tilts the recipe card so that Tyler can see it. He mixes the dry ingredients while Asher does the wet. The air is so charged Tyler almost can’t take it. He looks at Asher often, averting his eyes when Asher glances back. He wants to speak, but there’s nothing to say. This is John’s recipe. Tyler intended this moment to be cathartic for Asher. This isn’t catharsis.

But when Asher glances over at him while he mixes and catches Tyler’s eye, Tyler is sure his feelings are not one-sided.

Once the batter is in the tins and then into the oven, Tyler takes his apron off, grabs some water and follows Asher into the breakroom. He hands Asher the glass and perches on a stool. Instinct—or maybe cowardice—tells him he needs to wait for Asher to break the silence.

“Thank you, Tyler,” Asher finally says. He twists the glass round and round in his hands with his gaze focused on it. “I… I’ve needed this.” 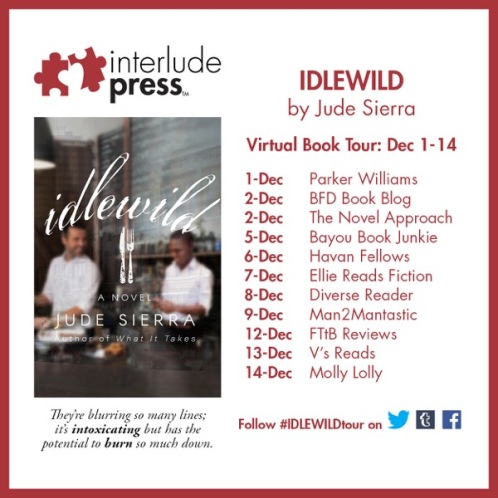 Jude Sierra first began writing poetry as a child in her home country of Brazil. Still a student of the form, she began writing long-form fiction by tackling her first National Novel Writing Month project in 2007, and in 2011 began writing in online communities, where her stories have thousands of readers. Her previous novels include Hush (2015) and What It Takes (2016), which received a Starred Review from Publishers Weekly.