Here we are again! Choosing a favourite book this month was difficult, because we’ve read some really good ones, but we did our best and brought you just one for each of us.

I know Annie is going to say her favourite read this last month was Blank Spaces, and it was one of mine, too. But since I can only choose one book I have to go with Pansies, by Alexis Hall. I loved that book, and Alexis’ writing is just one I can’t help but admire. You can check my review here.

Alfie Bell is . . . fine. He’s got a six-figure salary, a penthouse in Canary Wharf, the car he swore he’d buy when he was eighteen, and a bunch of fancy London friends.

It’s rough, though, going back to South Shields now that they all know he’s a fully paid-up pansy. It’s the last place he’s expecting to pull. But Fen’s gorgeous, with his pink-tipped hair and hipster glasses, full of the sort of courage Alfie’s never had. It should be a one-night thing, but Alfie’s never met anyone like Fen before.

Except he has. At school, when Alfie was everything he was supposed to be, and Fen was the stubborn little gay boy who wouldn’t keep his head down. And now it’s a proper mess: Fen might have slept with Alfie, but he’ll probably never forgive him, and Fen’s got all this other stuff going on anyway, with his mam and her flower shop and the life he left down south.

Alfie just wants to make it right. But how can he, when all they’ve got in common is the nowhere town they both ran away from.

I’m so excited I get to do one of these! Of course, this “official” reviewer stuff (I’m so fancy now) is new to me, but hopefully I’ll get the hang of things and be as awesome as Laura and Annie soon.

I spent a lot of October holed up in a pit of Grad School Despair, which means a lot of re-reading books I love.

But this month I did *finally* find the time to read Daniel and Eriks’s Super Fab Ultimate Wedding Checklist, by K.E. Belledonne. Although I didn’t officially review it on this blog, I did on Goodreads.
This is a great pick-me-up read that made me laugh and sigh with happiness at the end.

When Daniel gets caught up in the demands of a cheeky wedding planning app, his fiancé Erik grows frustrated with his preoccupation with adhering to heterosexual traditions. Will Daniel’s groomzilla ways give them the wedding of their dreams, or ultimately lead to their relationship’s demise?

Laura knows me too well, because yes, my absolute favourite book from October was Blank Spaces by Cass Lennox. And I could probably go and write an essay here on why I love it. But because it’s easier I’ll just link to the review. 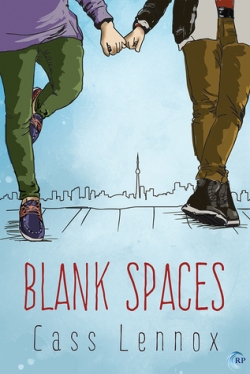 I said pretty much everything there already.

I’ll have to wait until November 28th to my most anticipated book to be released, but I’ve already preordered it. I love Elliot Cooper’s writing, and when I saw he was going to release a book with a pirate in it I didn’t resist; how could I? 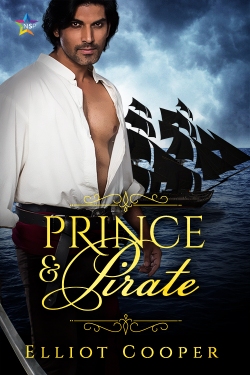 Prince Gavin is powerless to refuse when his father demands he secure an alliance with a distant kingdom. At first, he sees the journey as a chance to prove his worth and indulge in the grand adventures of his dreams. Yet nothing seems right about his father’s paranoid insistence he travel by merchant ship while disguised as a diplomat. Once out on the open sea, Gavin learns he’s been tricked into boarding an infamous pirate ship: the Ebon Drake.

Captain Marcas Drake is delighted to discover the courtier he’s kidnapped is really a prince. Acquiring such a hefty ransom will prove once and for all he’s a brilliant pirate in his own right, not riding the coattails of his father’s fame. And using his charms to seduce his prisoner makes for an entertaining pastime. But unfortunate events turn the Ebon Drake’s crew against their captain before the ransom can be carried out.

Marooned, Marcas and Gavin’s new equal footing turns the pirate’s sensual game into something else entirely. However, being stranded on a tiny island becomes the least of their worries when rescue arrives in the form of the bloodthirsty Crimson Queen, a pirate who’s been chasing Marcas for years. Working together to escape the queen is their only hope of freedom and a chance their growing love might outlast their misadventures.

My most looking forward to is Flying Without a Net by E.M. Ben Shaul. She’s an author who is new to me but I fell in love with the cover the minute I saw it. And after reading the blurb I just *had* to read it. 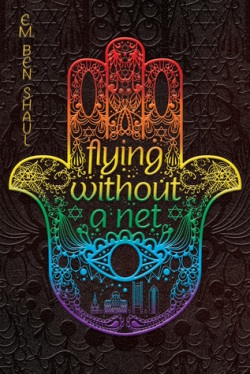 Luckily I got an ARC for this one so I don’t have to wait until release day. I started it this morning, and am just two chapters in, not far enough to say if it’s good or not BUT I’m glad there’s a glossary at the back of the book. Because whe reading in english I might not know a word but will probably understand it given the context. But the yiddish vocab is completely new to me, so that is quite helpful. And I learn new things too!

Dani Perez, a secular Israeli working as a software engineer in Boston, has never had trouble balancing his faith and his sexuality—until he meets Avi Levine, a gay Orthodox Jew and sign language interpreter. As they fall in love, Dani finds himself wanting Avi in his life but confused by Avi’s observance. Dani can’t understand how Avi reconciles what his religion demands with what his body desires. And although he wants to deny it, neither can Avi.

Despite the risk of losing Avi forever to a religious life that objects to their love, Dani supports him through the struggle to find an answer. Will they be able to start a life together despite religious ideology that conflicts with the relationship they are trying to build?

Based on a flaily “I can’t wait” by Avon Gale, and some stunning cover art, I was led to Bare by Lynn Kelling. It looks amazing: not just the cover, but the story I mean.

I’ve never read Kelling’s work, but I’m really excited to. This one is definitely on my “to-read” list.

Ev Myers is a former high school football star and Republican State Senator’s son, raised in a strict Southern Baptist household where his only option was to be silent, behave and, no matter how he might be feeling, to put on a happy smile. Desperate to escape the pressure to be the man his family insists he become, Ev has fled Kansas to attend college and is working to find out who he really is beneath the lies and carefully composed public image. But when he applies for a job as a nude model for a life drawing class out of a desire to be seen in a way that shatters all of his family’s taboos, it’s just the first step on a path that leads him away from everything he’s ever known. Handsome and headstrong adjunct arts professor, Adam Buchanan, is the first person to recognize Ev’s potential, and his determination to have Ev realize the importance of truth and stark honesty, as well as the beauty of flawed vulnerability provides the hope Ev needs to escape a world rife with kidnapping, brainwashing and deadly determination cure homosexuality, using whatever means necessary.