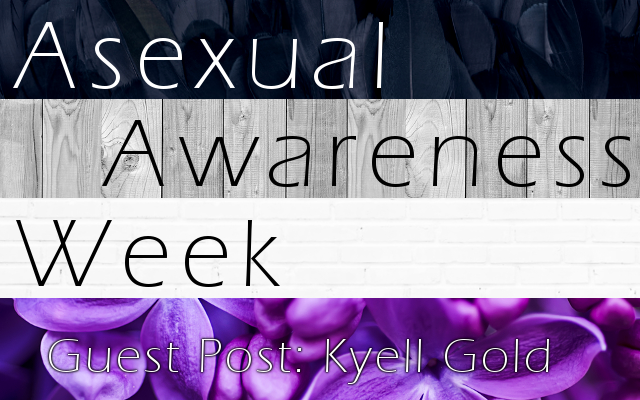 When we were planning the schedule for Asexual Awareness Week we thought “what if we had a guest post from someone that has written an ace character?” So we set out to ask on Twitter if someone was interested and Kyell Gold messaged us and told us he would like to talk about writing an asexual character for his latest book and all the learning process that implied.

So we’ll leave you in his hands now, because we think he has interesting things to say.

Two years ago, I set out to write “Black Angel,” the third book in a New Adult series about teenagers coping with relationship issues with the help or hindrance of ghosts from the past. The first and second books had gay protagonists, but I wanted to do something different for the third. Meg, the best friend of the other protagonists, had never seemed very interested in relationships; she was a cynic who didn’t believe in love raised by flower children. And the more I thought about the character, the more I thought of her as asexual. So I set out to learn about asexuality.

My friend’s brother, whom I’ll call Vic, was the only person I knew at the time who identified as asexual. He very kindly agreed to talk to me about his feelings and experiences. I was interested not so much in the biology of it as the experience of it, but Vic wanted to start out our talk with a definition and proof that there was a place on the spectrum of human sexuality for asexuality. As we talked further, I found out the reason for this: Vic said that for a lot of asexual people, the biggest challenge is convincing people that they exist (more specifically, that their lack of interest in sex is their nature and not a phase, illness, or scarring from some trauma. The second biggest is dealing with relationships they find themselves in.

My protagonist Meg, like many asexual people, was coping pretty well with life when nobody was pressuring her to have sex, have a relationship, and so on. But that doesn’t make for a good book. So in “Black Angel,” well-meaning friends assume she must be uncertain about her homosexuality and press her to explore it; a well-meaning heterosexual boy pushes to be her boyfriend. She’s moved out, so she doesn’t have to deal with her hippie parents telling her how wonderful love is, but she’s haunted by ghosts with sexual feelings and attractions, making her feel more uncomfortable about her own lack of them.

To write the book, I had to think about what I had in common with Meg, what experiences of mine I could use to inform hers. Learning to relate to others who aren’t like you is important not only for writers, but for anyone who wants to be a decent human being. I’m gay, and when I was in college (though I wasn’t out at the time) I heard plenty of my friends talk about gay people with derision, and most of the time that was accompanied by “I could never do (fill in any gay sex act).” When the gay rights movement gained traction and people talked about changing their mind on gay rights, you could see where they’d made a connection to gay people: “they just want to love each other,” or “they want to start a family.” Turning the conversation from things straight people can’t relate to (gay sexual acts) to things they can (love, romance, family) changed the conversation. And looking back over my interview with Vic, I see places where I was trying to understand his experiences by relating them to things I’d been through.

So I looked for intersections of my experiences with Meg’s. I thought about times I dated women I wasn’t attracted to because that was expected of me. I thought about the feeling that I couldn’t have a normal life with a male partner, about talking myself into trying to date more women. I thought about being sixteen and standing in a break room during a summer job with a bunch of early-twenties guys hooting over a Playboy calendar and trying desperately to think of something to say so they wouldn’t think I was weird, when I didn’t even understand why I didn’t feel the same way they did.

Those were the kinds of experiences I drew on when writing Meg’s struggle to cope with her friends and family pushing her into relationships. Is there something wrong with her because she doesn’t feel the same way they want her to?

The other topic I wanted to address in the book was the connection between sex and love, something I have struggled with myself. The health of relationships in popular culture is often measured by how often a couple has sex. When a movie couple realizes they’re in love, the first thing they do (often) is rip off their clothes and jump into bed. But while we’re starting to understand that you can have sex without love, the concept of love without sex is still very strange. Who better to explore this than a protagonist who is uninterested in sex?

Here again, I could remember what it was like to be a young gay man in a very heterosexual culture. Sex scenes in movies barely interested me. Young men doing stupid things just to keep having sex with their girlfriends baffled me. So I called on those experiences and wondered how I would feel if I never met someone whom I did find attractive, for whom I would do stupid things? What then does Meg think and feel when the boy she’s been friends with for years wants to take the next step and she doesn’t, when he touches her like people do in movies and she doesn’t feel anything? Does it mean she doesn’t love him? Does that too mean there’s something wrong with her?

Lastly, I wanted to write about the attitudes of people around her. We would imagine that other minority sexualities would be understanding of asexuality, but when Vic told an LGBT group at his college that he was asexual, they said, “We don’t cater to that” (he did want to emphasize that the work the LGBT community in general has done has been of great benefit to asexual people simply by making the world aware of alternate sexualities). Meg lives with gay male roommates and hangs out with a lesbian community because she figures they’ll be accepting of her no matter what, but it turns out that some of them have more trouble understanding her than she’d hoped. Many of them are convinced that her lack of attraction is something that she can “overcome” or “get past,” but she feels the flaws in those statements. What she has to do is discover for herself how she feels, what structure she wants to put on her life and relationships, and find a circle of friends who will respect her for who she is.

Ultimately we can’t know what it is to feel the things someone else is feeling. But we can know what it’s like to be told that there’s something wrong with us, to be pressured to act against our nature, or to have well-meaning people misunderstand us because they’re not listening (or because we feel unable to communicate). We can know what it’s like to be overlooked, to be told we don’t matter or don’t exist, to feel like there’s no place for us. Whether we’re trying to understand a character we’re writing, a person we’ve just met, or a friend revealing something personal to us, these commonalities make it easier to accept the truth that they are revealing to us: their truth, which is almost certainly neither wholly like nor wholly unlike our own.

Kyell Gold is a California writer who began writing furry fiction a long, long time ago. In the early days of the 21st century, he got up the courage to write some explicit gay furry romance, first publishing his story “The Prisoner’s Release” in Sofawolf Press’s adult magazine Heat. That led to a novel, Volle, and then a series of other novels and short stories. Kyell continues to write with the goal of releasing one novel-length work every year, in addition to various short stories that appear on sites such as FurAffinity and SoFurry (registration with age verification required to see most stories).

He was not born in California, but now considers it his home. His age is somewhere between “well out of college” and “retired,” as he works full time in the high tech industry. He loves to travel and dine out with his husband, Kit Silver, and can often be seen at furry conventions in California, around the country, and abroad. He’s happy to respond to fan mail, but asks that you glance at the F.A.Q. before writing.

You can find our post from sunday, where Laura and I talked about our experiences with Asexuality, here.
And the interview with Elyse Springer is here.