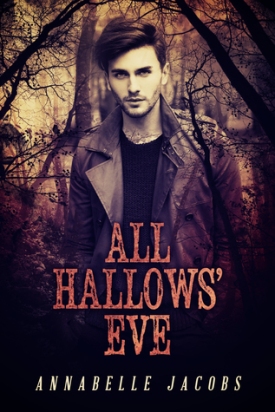 Will a centuries-old broken heart ruin the promise of new love?

Dominic Ashworth is descended from a long line of witches, although the family practice of witchcraft died out generations ago. Forever connected to a dark history, the house he grew up in remained in the Ashworth family for generations until his estranged father sold it.

On a mission to check out the new owners, Dominic runs into Caleb Jones and gives the gorgeous man his phone number—but getting a date should be the last thing on Dominic’s agenda.

Caleb and his best friend, Zach Briceworth, are oblivious to the heartache and magic tied to the foundations of their new home. When strange things start to happen, the truth emerges and surprises them both, especially as everything revolves around Caleb’s new love interest.

After a shaky start, Caleb and Dominic settle into an easy relationship, falling faster than either of them expected. But with Halloween approaching, the possibility of danger increases. The past is not always as it seems, and the ripples of a tragic event threaten to put an end to everything between them.

*A COPY OF THIS BOOK WAS PROVIDED BY SIGNAL BOOST PROMOTIONS*

Usually when I pick up a book by this author I know it’ll be another great read. But somehow this one didn’t grab me as much as the other books. I really liked the beginning of it and the premise of a family curse, but All Hallows’ Eve was especially in the middle a bit slow. Because of that I had a bit of a problem getting through. The pace picked up again toward the end so that I really enjoyed that. It was actually great again, like it was at the very beginning. Once there’s actually more action it was captivating and I couldn’t turn the pages fast enough.
I loved the epilogue! But the in-between wasn’t as good as I’m used to by this author.

One of my biggest pet-peeves is insta-love, and guess what we have in this book? There’s a kinda-explanation at the end to why they’re so drawn to each other but it doesnt feel plausible enough. And overall I just didn’t feel the chemistry.
Both MC’s don’t even know each other for a week and they’re pretty much in a relationship. And I love when there’s an instant *attraction*. But I have my problems with insta-love because one of the things I love most when reading romance is the falling in love part. The attraction and uncertainity and the awkwardness.. I love to experience that along with the characters, and when that is taken away it’s just lacking something to me.

Add to that, that they don’t communicate; and if they do not about the important things. It was frustrating and really only created so much drama they could have easily avoided if they had just talked.  Even after they both agree to be more open with each other they. don’t. talk!

And well, while the premise of the family curse was intriguing that part of the story didn’t whisk me away either because I would have liked to have more on that. Overall All Hallows’ Eve is an enjoyable read, although not as good as the other books I’ve read (and loved) by this author. I really hope the next one will blow me away again.
I’d recommend it to everyone who’s in the mood for a slighty spooky story and who doesn’t mind (or even enjoys) insta-love.

Annabelle Jacobs lives in the South West of England with three rowdy children, and two cats.

An avid reader of fantasy herself for many years, Annabelle now spends her days writing her own stories. They’re usually either fantasy or paranormal fiction, because she loves building worlds filled with magical creatures, and creating stories full of action and adventure. Her characters may have a tough time of it—fighting enemies and adversity—but they always find love in the end.
Social Media:
Twitter – https://twitter.com/AJacobs_fiction
Website – www.annabellejacobs.com