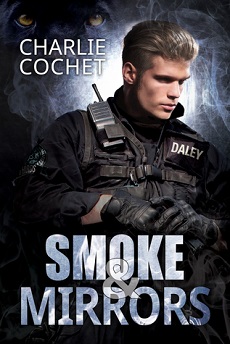 Life for Dexter J. Daley has never been easy, but he’s always found a way to pick himself back up with a smile on his face. Taken from his home, and the arms of his boyfriend and THIRDS partner, Sloane Brodie, Dex finds himself in a situation as mysterious and lethal as the Therian interrogating him. Dex learns what he’s secretly believed all along: his parents’ death wasn’t an accident.

Discovering the whole truth about John and Gina Daley’s homicide sets off a series of events that will change Dex and Sloane’s lives forever. As buried secrets rise to the surface and new truths are revealed, Dex and Sloane’s love for each other is put to the test, with more than their relationship on the line. If traversing the waters of murder and secret government agencies wasn’t enough, something inexplicable has been happening to Dex—and nothing will ever be the same.

I’d been expecting this book even since I finished reading Catch a Tiger by the Tail. And you know what expectations can do to you, right? When you have really high expectations for a book/movie/series/date/whatever, the possibilities that it will let you down are higher than we you don’t really expect anything from it. I’m really pleased to say that this wasn’t the case and Smoke & Mirrors was even better than I expected it to be.

I’m not so sure how I can talk about this one without spoiling anything, but I’m going to try anyway.

I was really excited to go back to Dex and Sloane, they were my first love in this series, and seeing them now they are bonded and they’ve dealt with a lot of issues that come with starting a relationship was truly special. I love how they’ve settled into a routine that works for both of them, how they talk through their issues and how they’re there for each other, being each other home.

The beginning, in true Charlie Cochet’s fashion for this series, packs a punch. From that moment, the story never stops going forward. I loved how everything that’s happened until now became entwined here to finally leads us to a resolution. There were moments when I was fearing that things would be a bit much but I never felt that the line between “believable” and “over the top” was crossed. I won’t say much more about the plot because I really don’t want to spoil this story for any of you.

Something that was truly special for me about his book were the personal interactions. I loved the quite moments we got to see between Dex and Sloane, they made my heart sing. But I also really liked their interactions with friends and family: Dex hanging out with Hudson and Cael, Sloane and Ash talking, Ash, Cael, Sloane, Dex and Tony behaving like a family. The only one I missed was Ethan, I adore him and I would have loved to see more of him in this book.

Now, I’m ready for Seb and Hudson’s story. Please, Charlie, give that one to us soon. Will it help if I make some puppy eyes at you?

A great addition to this fantastic series. 100% recommended.