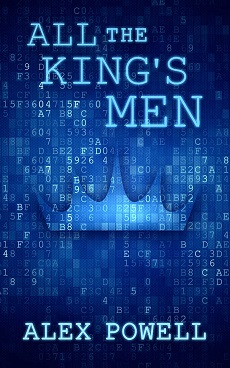 Fox is a mindnet hacker, and works for the mysterious man known only as King. He spends his time uncovering dangerous secrets and releasing them to the public.

But those who cause trouble are bound to attract, and despite their precautions King is taken prisoner by an unknown government. And if Fox is going to save him, he’s going to need help—help that comes from the very last place he expected to find it.

Add it on Goodreads
Preorder it at Less Than Three Press

I’m a bit conflicted about this one. While I liked the plot and the world building, I didn’t feel the romance and didn’t really get to believe it. So I guess this would be a 3 star (out of 5) read for me.

First of all, a kind of warning, because I’ve seen a few people surprised by this: 90% of this book takes place on the Internet, although not the one we know. The characters here can connect to the Internet and all their conscience will be transported there, leaving their bodies behind (kind of like Matrix). Once there, they can choose their appearance, move through public domains or through private ones.

Fox is a hacker in a group lead by someone all of them know as King. Their last mission has upset the Government greatly and while they’re in a meeting, agents from that Government attack them. To protect them all, King erases his own memory, leaving the rest of the group a clue to start recovering them is some kind of mad scavenger hunt. But one of the agents going after Fox and his friends may not be exactly what they thought he was…

I loved the sci-fi feel of the story: all that jumping through links, the public domains and the fact that they can choose to be whoever and whatever they want to be while in the Cerebrum; that’s what attracted me the most to this book. I also liked the hunt for clues and the way King had hidden them, how they had to work together to achieve something, getting to know each other better along the process.

The romance, on the other hand, I just couldn’t believe. I didn’t get a feel of what made Fox and Seven attracted to each other, didn’t see any chemistry there. And that’s a pity because I loved them as characters, they were well built and really interesting. I hope it was just my issue though, and that other readers get a feel of it, because I think the book deserves it.

So all in all, for me this was a good book with a strong sci-fi feel and a weak romance.