Emerson Robinette only leaves his apartment to get laid and go to work. 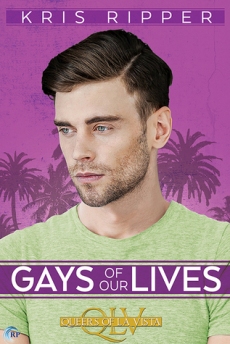 Having MS—and trying to pretend he doesn’t—makes everything more complicated, especially his fantasies of coming on strong and holding a guy down. Finding a partner who’ll explore that with him isn’t Emerson’s idea of a realistic goal.

Until a chance meeting with a hipster on a bus makes him reconsider. Obie is happy, open-hearted, and warm; what’s more, he gets his kicks being physically dominated, spanked, and teased until he’s begging. It would be perfect, except for one thing: Emerson isn’t made for happiness, and he doesn’t see how a guy like Obie would settle for a cynic like him.

But as far as Obie’s concerned, the only thing keeping them apart is Emerson. Can Emerson handle a boyfriend who’s more invested in his future than he is? Emerson’s barely convinced he has a future. But when Obie’s smiling at him, anything seems possible.

Add it on Goodreads.
Pre-order it at Riptide Publishing / Amazon DE / Amazon US.

I had a hard time writing this review because I really don’t know what to think of this book. Going into it I had high expectations because the reviews and ratings I had seen of it sounded amazing. But it took me way to long to like one of the main characters and because of that the story dragged a bit for me.

The biggest problem I had was that it was hard for me to relate or understand Emerson. I understand that a diagnosis like MS hits you really hard and you don’t know what to do because suddenly everything seems so dark and impossible. And everything you had planned for your life is just thrown into disarray.
Maybe I should have expected something not so light when I requested the book. But the cover and the blurb made this book sound and look lighter than it was.
I had a hard time connecting with Emerson because he didn’t seem to want to do anything. He was just going through the motions and didn’t even do basic things that – even though nothing would heal his MS- could certainly help him.
I thought that maybe he’d realise way earlier in the book that his MS didn’t mean that he couldn’t do anything. That he didn’t need to stop living his life.

On the other hand we have Obie who is such a sweet guy. Someone who’s so positive, patient and caring. And Emerson and Obie fit together, but it took me a long time to see what Obie (obviously) saw in him or he wouldn’t have kept coming back to him.
Good thing Obie was really persistent but Emerson certainly didn’t make it easy for him.
Obie really was the star of this book for me and I adore him.
I started liking Emerson toward the end of the book when he’s there for Mildred, and I wished it hadn’t taken so long. Because he can be quirky and sarcastic but for too much of the story this felt one sided and like he wasn’t really interested.

Gays of Our Lives is a good start to this series but sadly didn’t live up to my expectations. I am looking forward to the next book though, because my not loving this book is solely because I just couldn’t connect with Emerson.

The writing, the mystery aspect that gets mentioned in the blurb and a few times during the book and the other characters, like Mildred for example, were great and I’m really curious to read her story. But I think it really depends on whether you like Emerson or not to love this book so I’ll recommend it. Who knows maybe he’ll be one of your favourite characters?