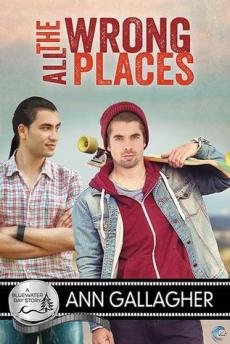 Three cheating girlfriends in a row have given skateboarder Brennan Cross the same excuse: he wasn’t meeting their needs. Desperate and humiliated, he goes to the professionals at the local sex shop for advice.

Zafir Hamady, a sales clerk at Red Hot Bluewater, has an unusual theory: he doesn’t think Brennan is a bad lover. In fact, he doesn’t think Brennan is heterosexual. Or sexual at all, for that matter. He also can’t stop thinking about Brennan. But even if he’s right and Brennan really is asexual, that doesn’t mean Zafir has a chance. Brennan’s never dated a man, and Zafir’s never met anyone who’s game for a Muslim single father with a smart mouth and a GED.

Brennan’s always thought of himself as straight. But when sex is explicitly out of the mix, he finds himself drawn to Zafir for the qualities and interests they share. And Zafir can’t help enjoying Brennan’s company and the growing bond between Brennan and his son. They work well together, but with so many issues between them, doubts creep in, and Brennan’s struggle with his identity could push away the one person he didn’t know he could love.

Add it on Goodreads.
Pre-order it on Riptide Publishing.

I’ve read a few books with asexual characters and some of them were really disappointing because they portray us as being defective and needing healing. And by the end of the book the “asexual” would be cured and really loving sex and wanting it. But I knew that this one wouldn’t be one of those stories because the author is Ann Gallagher (also writing as L.A. Witt, Lauren Gallagher, and Lori A. Witt). And one thing you can trust this author to do, no matter under which pseudonym the book is published, is, that she does her research and that she doesn’t write cardboard characters. Her characters are always fleshed out and relatable.

And Brennan and Zafir were such characters. Ann Gallagher created two believable ace characters. There’s nothing like a text-book ace and there’s a lot of differences, but the way Ann Gallagher wrote Zafir and Brennan felt realistic and I was instantly drawn to them and never once thought that I was reading about made up characters. From the first page on I was in the story and couldn’t stop reading until I had finished the book.

Brennan and Zafir initially bond over Brennan figuring out that he’s asexual. Zafir offers to answer any questions Brennan has and soon they’re spending a lot of time together. I loved how their relationship slowly build. And was rooting for them both the whole time.
The story flowed really nicely. There’s just the right amount of drama to keep it interesting but it all felt real. Like it was two people figuring out what they want and who they are and not characters in a book.

I expected Brennan to question his sexuality more than he did. He seemed to be really comfortable to finally know what to label himself. So him questioning it that late in the story seemed strange. Then again as I said before there’s nothing like a textbook asexual and I did expect him to question it after all.

All the Wrong Places features some great side characters. And OMG! Tariq was soo cute and adorable. Such a sweet nine-year old and definitely one of the highlights in this book.

I’ve read almost all books in this series and this one is a fantastic addition to it. It’s sweet and romantic and a great example of what it’s like to be asexual. Definitely recommended!