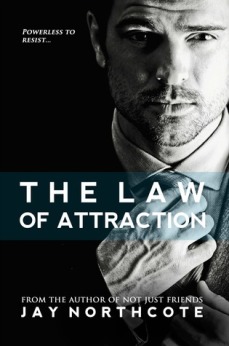 When a professional relationship turns personal, it’s impossible to resist the law of attraction.

Alec Rowland is a high-flying lawyer in a London firm whose career is his life. He doesn’t have time for relationships and his sexuality is a closely guarded secret. After picking up a cute guy on a Friday night, Alec’s world is rocked to its foundations when his one night stand shows up in the office on Monday morning—as the new temp on his team.

Ed Piper is desperate to prove himself in his new job. The last thing he needs is to be distracted by a crush on his boss. It’s hard to ignore the attraction he feels, even though Alec’s a difficult bastard to work for.

Both men strive to maintain a professional relationship, but tempers fray, passions ignite, and soon they’re both falling hard and fast. If they’re ever going to find a way to be together, Alec needs to be honest about who he really is because Ed won’t go back in the closet for anyone.

Add it on Goodreads.
Buy it on Amazon US / Amazon UK

His companion was still watching him, seemingly waiting for him to make his move. Alec felt irrationally irritated. This wasn’t how it was supposed to go. Even though he only did it occasionally, picking up men was easy for Alec. Buying a drink was more than he usually bothered to do for the twinks he hooked up with when he was in the mood for a warm body to fuck. Alec was well aware of his own attractiveness and used it to his advantage. A crook of a finger, a tilt of his head, or even just a look was usually enough to make them come running.
But this guy didn’t seem to know the rules of the game.
“Strong, silent type, huh?” He suddenly grinned at Alec, all neat white teeth and dimples. “You could start by telling me your name. Mine’s Ed.”
“Alec.” He handed a note to the barman as he came back with their drinks. “Keep the change.”
“Cheers, mate.” The barman winked as he pocketed the tip.
Ed’s eyebrows lifted. “Change from a twenty? You must have money to burn.”
“Something like that.” Alec let his gaze rake deliberately down Ed, examining him from the front this time. His arms were still folded over his chest and his T-shirt had ridden up enough to expose a feathered line of hair on his belly, leading down to a nice-looking package in obscenely tight skinny jeans. “I hope you bottom?”
Ed blinked and choked on his mouthful of rum and Coke. Alec suppressed the urge to grin, enjoying the fact that Ed had momentarily lost his cool.
“I’ve been known to,” Ed replied, rallying. He licked his lips.
“Good.” Alec held his gaze, noting with satisfaction that Ed’s pupils had blown wide and his lips parted as Alec looked at them. God, he had a pretty mouth. Alec lifted his glass and downed his drink. The burn of the whisky tore through him and made his nerves tingle with anticipation. He needed a good fuck; it had been too long. “Drink up, then.”

I FLOVED this book so much! So, now I’ve got that out of the way let me try to express myself and the love I have for this book more eloquently.

First let me tell you, that I work in a lawyers office myself, so I can tell you that she did her research. The way she portrayed the goings-on of a lawfirm are true to real life. Of course it varies from one law firm to another how exactly you organise your office, but the way Ms. Northcote pictured it in The Law of Attraction is absolutely plausible.

This book starts of with a bang. The first time Alec and Ed meet in a bar and sparks fly. It doesn’t take them long to decide where exactly the night is going to end. 😉

Alec is a senior lawyer at the law firm he works for and because he wants to become a partner work is his one and only priority. He doesn’t do relationships and he’s not out at work or to his family, so the only sexual experiences he has are one night stands. He doesn’t care for their names or their lives, it’s really only about getting off and getting the guys out of his life again as fast as possible.
This works pretty well for him until the monday morning after his latest hook-up Alec’s latest one night stand shows up at the law office and turns out to be the newest addition to Alec’s team.

God I loved Alec and Ed.
On the one hand we have Alec who is so afraid of coming out that his best friend, Belinda, pretends to be his girlfriend whenever needed and on the other hand we have Ed who is out and proud and won’t go back into the closet for anyone. This of course makes for some great tension between both characters.
Oh how I loved the chemistry between Alec and Ed!
At first Alec might seem like he’s an asshole, but that’s just the wall he put up around himself to protect himself and his secret. I loved his cockiness but also the times when he let himself show Ed his vulnerable side. The poor guy! I don’t want to give too much away, but I really could relate to him and completely understood his struggle with himself and why his first instinct was to push Ed away.

I’ve mentioned already that I loved the chemistry between both characters and let me tell you the sex scenes in this book were hot! Like scorchingly HOT!

When I first heard of this book I knew that it would be the perfect book for me. I mean lawyers, office romance and the little age gap had me like GIVE IT TO ME!!
And the more I found out about it, the more I wanted to read it.

This book really features everything I love, the office romance, the coming to terms with his sexuality, a bit of humour, a bit of heartbreak and the britishness I absolutely love in all of Jay Northcotes stories.

The Law of Attraction is another amazing book by Jay Northcote and I highly recommend it to everyone. You really don’t want to miss this one!

About the author:
Jay lives just outside Bristol in the West of England, with her husband, two children, and two cats.
She comes from a family of writers, but she always used to believe that the gene for fiction writing had passed her by. She spent years only ever writing emails, articles, or website content. One day, she decided to try and write a short story–just to see if she could–and found it rather addictive. She hasn’t stopped writing since.