Today is the last day of January. How did that happen? I feel like this month has just flown by and nothing really happened. But when I really think about it there’s stuff that happened this month:

First of all.. I started blogging. Which honestly I never thought I’d do. And I don’t know why that is because I’m constantly talking about books online, or with friends IRL. I read a lot but reviewing never really came to mind until I started talking to a friend and then decided to give it a go. So far I really enjoy it.

Another thing that happened was that I registered for the UK Meet. (Yay!!) I’ve wanted to go ever since I first heard of it in 2014. But well, I was unemployed so obviously I didn’t have the money to fly to the UK, pay for a hotel, the Meet etc.
And last year was already booked with too many conventions and stuff that I just couldn’t fit it in anymore.
But this year I’m going! And I’m so excited to meet all my favourite authors and other bookish-people and well, I’ve also never been to the UK before, so I’m really excited about that too. 🙂
Right now it looks like me and my mum will travel a bit through the UK before she flies home and I go to the Meet and I. can’t. wait!

The last thing that happened that I think is worth mentioning here, was the reader interview I did with Hans M Hirschi. First time I was interviewed (apart from job interviews, but those do not count ;). So go check it out.
I was a bit nervous about that one because it’d be “putting myself out there”. Maybe you understand what I mean, but I’m not comfortable to be in the spotlight, so this was definitely something new for me.

All in all january was a good month. 🙂

What I’m looking forward to in February:

Honestly, so far I don’t have any plans for february which is unusal for me, so I guess I’ll just wait and see what happens. 🙂
It’s not long now until the Cologne Carnival. Carnival here is absolut MADNESS and so not my thing. I think to really enjoy it you need to be born here. xD
But I have an extra day of weekend because the 8th of february (Rosenmontag) is off and next thursday is only half a work day, so I can’t really complain. More reading time for me!

Talking of books, these are the 5 books I’m most excited for next month:

Out of Nowhere by Roan Parrish (Out February 29th)

The only thing in Colin Mulligan’s life that makes sense is taking cars apart and putting them back together. In the auto shop where he works with his father and brothers, he tries to get through the day without having a panic attack or flying into a rage. Drinking helps. So do running and lifting weights until he can hardly stand. But none of it can change the fact that he’s gay, a secret he has kept from everyone.

Rafael Guerrera has found ways to live with the past he’s ashamed of. He’s dedicated his life to social justice work and to helping youth who, like him, had very little growing up. He has no time for love. Hell, he barely has time for himself. Somehow, everything about miserable, self-destructive Colin cries out to him. But down that path lie the troubles Rafe has worked so hard to leave behind. And as their relationship intensifies, Rafe and Colin are forced to dredge up secrets that both men would prefer stay buried.

The Law of Attraction by Jay Northcote (Out February 5th) 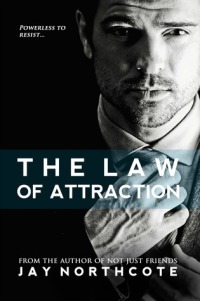 When a professional relationship turns personal, it’s impossible to resist the law of attraction.

Alec Rowland is a high-flying lawyer in a London firm whose career is his life. He doesn’t have time for relationships and his sexuality is a closely guarded secret. After picking up a cute guy on a Friday night, Alec’s world is rocked to its foundations when his one night stand shows up in the office on Monday morning—as the new temp on his team.

Ed Piper is desperate to prove himself in his new job. The last thing he needs is to be distracted by a crush on his boss. It’s hard to ignore the attraction he feels, even though Alec’s a difficult bastard to work for.

Both men strive to maintain a professional relationship, but tempers fray, passions ignite, and soon they’re both falling hard and fast. If they’re ever going to find a way to be together, Alec needs to be honest about who he really is because Ed won’t go back in the closet for anyone.

I was counting down the months until the end of my deployment. My days were spent working on military vehicles, and I spent my nights playing video games that would distract me until I could leave Staff Sergeant Garrett Reid behind.

That was when I met him: Kai Bannon, a fellow gamer with a famous stream channel.

I never expected to become fixated on someone who’d initially been a rival. And I’d never expected someone who oozed charm to notice me—a guy known for his brutal honesty and scowl. I hadn’t planned for our online friendship to turn into something that kept me up at night—hours of chatting evolving into filthy webcam sessions.

But it did. And now I can’t stop thinking about him. In my mind, our real life meeting is perfect. We kiss, we fall into bed, and it’s love at first sight.

Except, like most things in my life, it doesn’t go as planned.

When Dashiel’s body is found dumped on an East London wasteland, his best friend Danny sets out to find the killer. But Danny finds interaction difficult and must keep his world small in order to survive. By day he lives in an abandoned swimming pool and fixes electrical devices to trade for supplies, but by night, alone, he hunts sharks—a reckless search for dangerous men who prey on the vulnerable.

A chance meeting with an American boy selling himself on the streets throws this lonely existence into disarray. Micky is troubled, fragile, and Danny feels a desperate need to protect him—from what, he doesn’t know. As Danny discovers more about Micky, he realizes that what Micky needs saving from is the one thing Danny can’t help him fight against.

To save Micky, Danny must risk expanding his world and face something that scares him more than any shark ever could: trusting he will be accepted for who he is. If a freezing winter on the streets, a sadistic doctor, and three thousand miles don’t tear them apart first, that is. 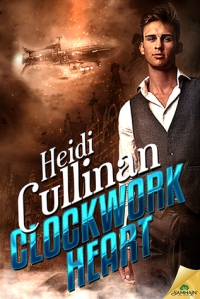 As the French army leader’s bastard son, Cornelius Stevens enjoys a great deal of latitude. But when he saves an enemy soldier using clockwork parts, he’s well aware he risks hanging for treason. That doesn’t worry him half as much, however, as the realization he’s falling for his patient.

Johann Berger never expected to survive his regiment’s suicide attack on Calais, much less wake up with mechanical parts. To avoid discovery, he’s forced to hide in plain sight as Cornelius’s lover—a role Johann finds himself taking to surprisingly well.

When a threat is made on Cornelius’s life, Johann learns the secret of the device implanted in his chest—a mythical weapon both warring countries would kill to obtain. Caught up in a political frenzy, in league with pirates, dodging rogue spies, mobsters and princesses with deadly parasols, Cornelius and Johann have no time to contemplate how they ended up in this mess. All they know is, the only way out is together—or not at all.

What are books that you are looking forward?
Anyone of you I’ll maybe see in Southampton in September? 🙂