What Blowing It is about: 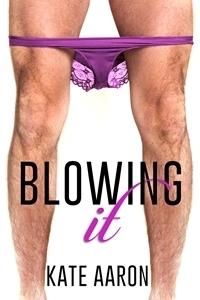 Owen Barnes never expected writing to make him rich, much less with a YA novel written for a bet. Being nominated for the Carnegie Medal, the most prestigious award a children’s author can win, is a dream come true. But Owen’s newfound fame comes at a price, and not just changing his surname to Black.

Gruff, gentle building surveyor Magnus Cassidy is the first man to catch Owen’s interest in almost two years. Owen’s agent, Max, might be trying to control his image, but Magnus sees the real Owen: the eyeliner, drainpipe jeans, and sexy underwear, not the Young Conservative in a tweed jacket Max is turning him into.

When a photo of Owen and Magnus appears online, just weeks before the Carnegie ceremony, Max starts damage limitation. Out and proud since he was fourteen, Owen isn’t going back into the closet without a fight, and he refuses to let his agent erase Magnus from his life. Encouraged by his friends, Owen lashes out, not realising his behaviour could hurt the man he’s doing it all for. Can Owen find a way to reconcile his public and private lives, or has he already blown it?

First off I have to say that I really shouldn’t judge a book by it’s cover. And I’m really sorry I did that, Ms. Aaron!
I could have read this book a lot sooner had I not decided that this book probably wasn’t for me based on the cover! =( Boy would I have missed out! Because not only did I like this book, I asbolutely fell in love with Owen and Magnus, with the writing and EVERYTHING! There’s just something magical about the authors writing that draws you in and doesn’t let you go. The characters feel so real and alive, like you could just go out and meet them for a coffee or something.

Owen Barnes only became an author because a friend of his bet him he couldn’t write a YA novel. But turns out he can and he’s really successful at it too! The only problem with being a famous author is that Owen is always in the public eye, which means for him, that he has to go back in the closet or forget about being an author because the public knowing that he’s gay doesn’t fit into the perfect image of a YA author. He’s signed a contract for a 5 book series containing a clause regarding his personal life so if he wants to continue writing his books he has to be straight for the public eye. When he signed the contract he didn’t think that it would ever be a problem for him.
That changes when he meets Magnus at one of his book signings.

Magnus attends the book signing with his niece who’s a really big fan of Owens book and when they meet they immediately form a connection and agree to meet for a coffee after the signing.

Of course Owen’s agent Max hears of the new relationship so he decides to use a newly signed-author, Becky, to make it look like Owen and to the public that she’s Owens girlfriend. It doesn’t take a genius to figure out that this is going to put a strain on even the most perfect relationship and eventually it does.

What really saddened me while reading Blowing It was that even though it’s 2016 we still live in a world where people are made to hide their true self because being who they are might cost them their career. I can only imagine how hard that must be, and Ms. Aaron did a wonderful job in portraying Owens struggle with being back in the closet again after being out before.

This book has so many great characters, that really add to the story and make it more real. I loved all except for Max. But Magnus was my favourite. I absolutely adore him! He’s such a sweetheart and I loved that he’s a family-man, so loving and caring, and understanding of Owens job. He knew what he was getting into when he met Owen and was okay for them to secretly lead their relationship. I really wish he was real!

Blowing It is a great read. It’s thoughtful and hot (MANTIES!!) but mostly a light and beautiful story with beautifully flawed and relatable characters.

I’ve read this book twice already and I know I’ll read it many more times.