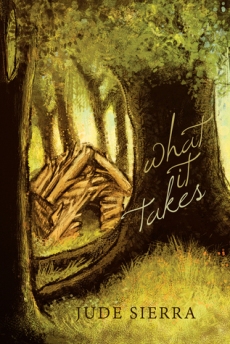 The connection was instantaneous. Moments after Milo Graham’s family relocates to Cape Cod, he meets Andrew Witherell—launching a lifelong friendship built on a foundation of deep bonds, secret forts, and plans for the future.

When Milo is called home from college to attend his domineering father’s funeral, he and Andrew finally act on their mutual attraction. But doubtful of his worth, Milo decides to sever all ties with his childhood friend.

Circumstances send both men home again years later, and their long held feelings will not be denied. But will they have what it takes to find lasting love?

What it Takes starts with Milo and his parents moving to Cape Cod where he meets Andrew after just a few days there. They’re both eight years old and instantly hit it off. I loved to see their friendship grow from Milo keeping secrets from Andrew to them sharing their most intimate secrets.
I loved to see both characters develop from kids to teenagers to young adults and then finally see them when they’re all grown up.

I want to take a bow for how Ms Sierra handled the abuse from Milo by his father. In the whole book there’s only one time where it’s on-page and not just mentioned by Milo or Andrew afterwards. And even reading that one scene was really difficult. The abuse follows Milo (and Andrew) throughout the story, through school and then college and even after Milo’s father dies. It’s always there but somehow Ms Sierra manages it, that it never becomes too much for the reader. There’s also always hope in her words that it might get better, that when Milo finally leaves for college he’ll be able to leave it all behind.
Of course it’s not that easy. Because his fathers words and actions are so deeply rooted inside Milo he can’t just shake it off and become a different person once he goes to college. And it wouldn’t have felt real if it had been that easy.

That’s another thing I really loved about this story, the way the characters and everything that happens feels so real. For example Milo’s fear and anxiety or the way Andrew tries to be a safe haven for Milo even when he’s angry with him. Andrew is always there for Milo. No matter what he needs, he’s there, even if it’s just a phone call in the middle of the night because Milo didn’t pass a quiz and he’s feeling anxious.

The reader has the opportunity to really get to know both characters as they grow up because we meet them so young. And although the book spans about 20 years of their lives it never once felt dull or boring or made me skip pages “to get to the interesting part of the story”. I truly enjoyed this book from the first to the last page and would have loved to read even more of their story.

This was my first book by this author, but definitely not my last one.
I saw that she has another book out with Interlude Press, and I think I’m going to read that as soon as possible. 🙂